USING AN EXTINGUISHER? REMEMBER THE P.A.S.S.﻿

Always keep your back to an unobstructed exit, stand six to eight feet away from the fire, and follow the PASS (Pull-Aim- Squeeze-Sweep) four-step procedure: 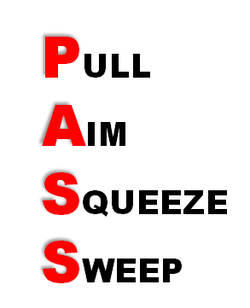 PULL THE PIN -﻿ This unlocks the operating lever and allows you to discharge the extinguisher. Some extinguishers may have other lever-release mechanisms.

﻿AIM LOW -﻿ Point the extinguisher nozzle (or hose) at the base of the fire.

﻿SQUEEZE THE LEVER ABOVE THE HANDLE -﻿ This discharges the extinguishing agent. Releasing the lever will stop the discharge. (Some extinguishers have a button instead of a lever.)

﻿SWEEP FROM SIDE TO SIDE -﻿ Moving carefully toward the fire, keep the extinguisher aimed at the base of the fire and sweep back and forth until the flames appear to be out. Watch the fire area. If the fire re-ignites, repeat the process.
Go Back To Education